A braised rabbit covered with an unctuous chocolate sauce with a touch of wine served on a thick mashed potatoes bed. A recipe of Catalan influence. 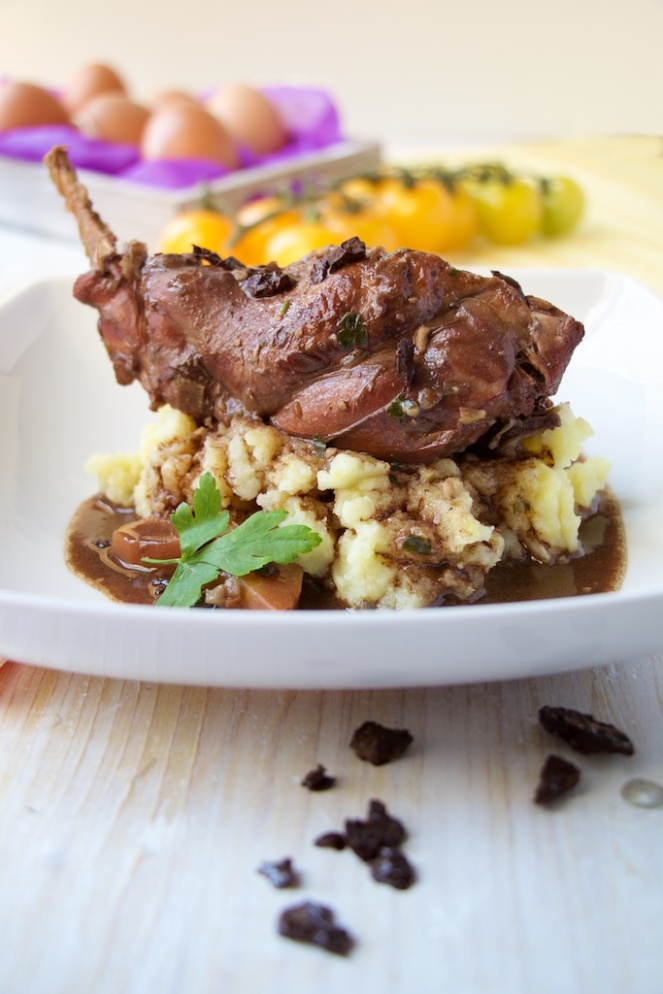 This is a creation inspired by a Catalan dish called Conejo al chocolate, which means rabbit in chocolate. This version is slightly different than the traditional recipe from Catalonia, Spain. I know the Basques have there own version also, with brandy instead of wine. In Catalonia they use fortified wine called “Rancio” to make it, a bit similar to porto. To make this recipe easier to reproduce at home I’ve just used a normal wine, but a porto would do too. It makes the dish in the end a bit less sweet which personally I prefer.

Rabbit recipes are great but often underrated because just like chicken breasts the meat is so lean… cooking it the wrong way will dry it out fast and ruin it. For this recipe, no worries, it is a kind of stew so it won’t dry out the meat.

I’ve picked up the rabbit at my favourite market, as always, and asked the lady what she does with the heads. “Is there anything to eat in it or is it for broth making only?“she recommended to eat the cheeks and tongue, and then said you either love it or hate it, it’s a black or white thing… So, after the cooking process, I’ve tried both and it surprisingly was a “grey” situation in my case…the cheeks, I’ve loved! A super tender and tasty part. As for the tongue… ouf! I’ll have to work on that one… I need a good tongue recipe to make peace with it, open invitations to share a rabbit tongue here…

Chocolate is a great thickener for sauces, although it isn’t used much in cuisines, I guess because of it’s price. My chocolate comes from the Mecca of Chocolate ; Guadeloupe. I’ve visited the “Maison du cacao” last year and couldn’t resist the urge to buy that big 1kg pure cacao brick and cacao butter. They the cacao paste; Gwo Kako, in Creole and they use the cacao butter to cook and also to moisturize their skin… I mean chocolate is so polivalent. I wouldn’t be surprised to hear they grease their cars also with cacao butter over there. While at the museum, they’ve made us a cacao drink with the Gwo Kako, cane sugar and water, never use milk! the lady said, no idea why… and simply with water it was a”out of that world” experience, such a velvety and chocolaty delight! Ok, ok…. enough about that, let’s go back to our recipe…

The final step of the recipe ends with a “picada“, this is “the number one” thing you learn in traditional Catalan cooking class and it makes a big difference to a dish. It’s a really small amount of paste added in the end of the cooking process of a stew or sauce made out of a mix of fresh herbs, nuts, garlic, olive oil, etc. Depending on the recipe you make, sometimes it’s just 2 or more of those finalizing ingredients. It’s a great trick to give your meal a final fresh touch and it also helps thicken the liquid. Usually it’s by hand done in a mortar. The picada stays optional but if you want to make this extra small step it will bring your meal an extra mile! Believe me, this Catalan little secret is well worth the extra 2 minutes of work.

So let’s make that chocolate rabbit!

The picada (the finishing touch)

Serve on a thick mashed potatoes bed with a few chocolate crumbs on top. Enjoy!

9 thoughts on “Rabbit in wine and chocolate sauce”