Vietnam has some of the best gastronomic treasures on this earth, if you ask around which soup would be the most popular worldwide… I think the Pho soup would surely be in the top 5. The traditional Pho  (vietnamese soup) is Pho Bo, the last 2 letters standing for Beef or there is also the Pho Ga which is done with chicken broth instead of beef. This recipe is a mix of both, with a 80% of homemade beef stock and 20% chicken. The result of this dish is a Pho Bo Ga. 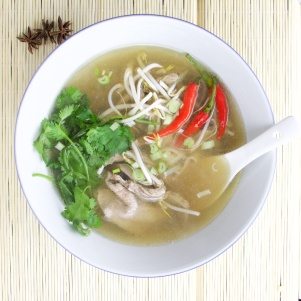 The origin of Pho isn’t clear, some say it’s from the occupation of the French in Vietnam, others say it from the Cantonese. Either way it’s a delicious soup, which you can eat for breakfast, to diner in Vietnam. I’ve visited Vietnam last year, and every single hotel would serve us pho for breakfast which is somehow strange for a westerner and especially when it’s about 40°C (100F) outside… I have to say, I prefer the pho as a diner soup.

The magic here lays in the broth, there is a few special, uncommon procedures about that soup. For example, you have to char, burn the ginger and onions at first… which isn’t a typical method for broth. Also it’s important to keep the broth clear, which I have to say, isn’t perfect in  my picture, resulting of adding extra meat at the end… which blurred my soup up. The trick to keep it clear

is to pre boil your meat pieces, then rinse them in cold water and restart the process… make sure it never reach a full boiling, this blurs up a broth quite fast. When you see those tiny bubbles forming lower your fire, it should be simmering really gently, just a few minuscules bubbles showing. Then it’s a 5 hours long slow cooking process.

Another important ingredient here is the fish sauce, which replace salt at the end of the coccion. I recommend to search for a Fish sauce made in Vietnam, since the Thailand “fish sauce” isn’t made with fishes, but rather calamari, and the taste differs.