These purple cabbages Egg rolls flavored with pork, ginger and garlic are enveloped in a light crunchy phyllo. They are also baked instead of fried for a healthier version.  Accompanied with a plum sauce, these egg rolls are a kid’s favorite.

The other day, I was doing my monthly round in my favorite asian market and saw this “plum sauce” bottle, memories came back rushing to me. Memories of my family going to a Chinese restaurant as a child back in Canada and eating my favorite dish there: egg rolls with this plum sauce! I remember, like it was yesterday, dipping my eggrolls into this sweet and sour sauce until I couldn’t breath anymore. What a tasty memory!  I often go shop in this asian shop and never happened to get this “need” of plum sauce. It must have been a sign or something so I bought it. Back home I was searching for a way to make egg rolls into a lighter version. The answer: Phyllo dough, which is low in  fat and calories, plus no need to fry it, you can bake it instead and with a nice finishing coat of egg wash to make it this typical golden finishing touch of egg rolls. 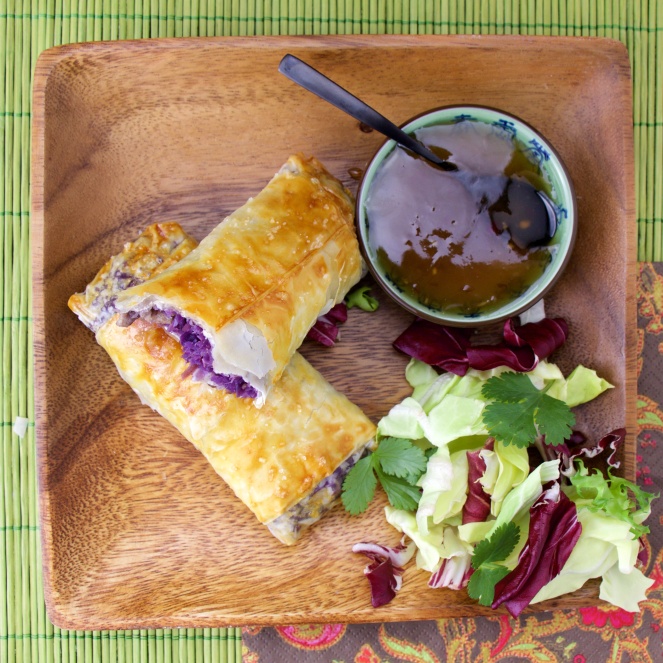 Coming back home with all my ingredients and mixing it up, my first batch ended up into… way too big egg rolls with way too much meat. Also, being the first time my husband tried a this dish, he told me the inside was a bit sad looking with a greyish mix of white cabbage and pork so he suggested to use a red cabbage to give it a nicer aspect. Husby is a genius… so I’ve done my second batch and voila! Success! A great dish was born!

Egg rolls have an unclear past… most probably originating from Southern China. The equivalent is actually called spring rolls in China and usually pretty smaller and considered a dim sum. Coming for more precisely from the Cantonese cuisine the wrappers was a thin wheat and eggs dough turning a golden cylinder once fried. The roll’s color believed to bring prosperity and wealth for that matter a popular dish served on Chinese New Year Eve. You can substitute the phyllo for a Spring Roll/Egg rolls wrapper sheets they sell usually frozen in the Asian markets. While in Vietnam there is many varieties of spring rolls one of them being the famous “fresh” kind of spring rolls with rice paper wrapper. The Vietnamese uses a rice wrapper and the closest looking rolls of theirs to the western version is called chả giò, using a rice wrapper and sometimes served fried, other times uncooked. They also enjoy adding a touch of freshness like mint or crunch to their rolls. Then from there, the egg roll evolved or developed from country to country, having each their own personal twist on the recipe. I, personally, wanted to reproduce the egg rolls from my childhood, westerners style “egg roll” with cabbage, pork, ginger, garlic for the simple fact that I’ve wanted to bring back a childhood memory.

For this particular version of egg rolls I’ve used a phyllo pastry  the size of a standard sheet of paper and lightly coated it with a spray of olive oil (which loses it’s flavor when cooked) and folded it into two. You can also use a neutral oil spray. Then I’ve simply added the filling and wrapped it up into those small cylinders and pushed the sides lightly to give it ” the western egg roll form”. Of course the color is important so I’ve covered the rolls with a nice egg wash, it also help to keep the”egg” factor in the “egg roll” recipe. This way you don’t have to fry and get extra oily egg rolls, you simply bake it and voila! A nice crispy and healthy bite! Phyllo dough is way lighter than the most dough if you use a light spray, plus you’ll get the crunchy texture without frying anything. All this results into a lighter version of egg rolls with a fun color to it! Perfectly suitable for the freezer to keep for later, make sure they don’t touch much, add them to a freezer bag. To defrost, it’s better in the oven to keep the crisp factor, directly from the frozen state for 12-14 minutes at 180°C (350°F) or in the microwave for 2 minutes.

Serve with a plum sauce or sweet and sour sauce and a few cilantro leaves. Enjoy!