Baked Twice Sweet Potato a la Mexicana is all the flavors of a great spicy taco inside a double baked sweet potato. An easy homemade spicy taco mix to season the meat, a few fresh tomato dices, crunchy lettuce and cheddar and a final smooth touch of sour cream. 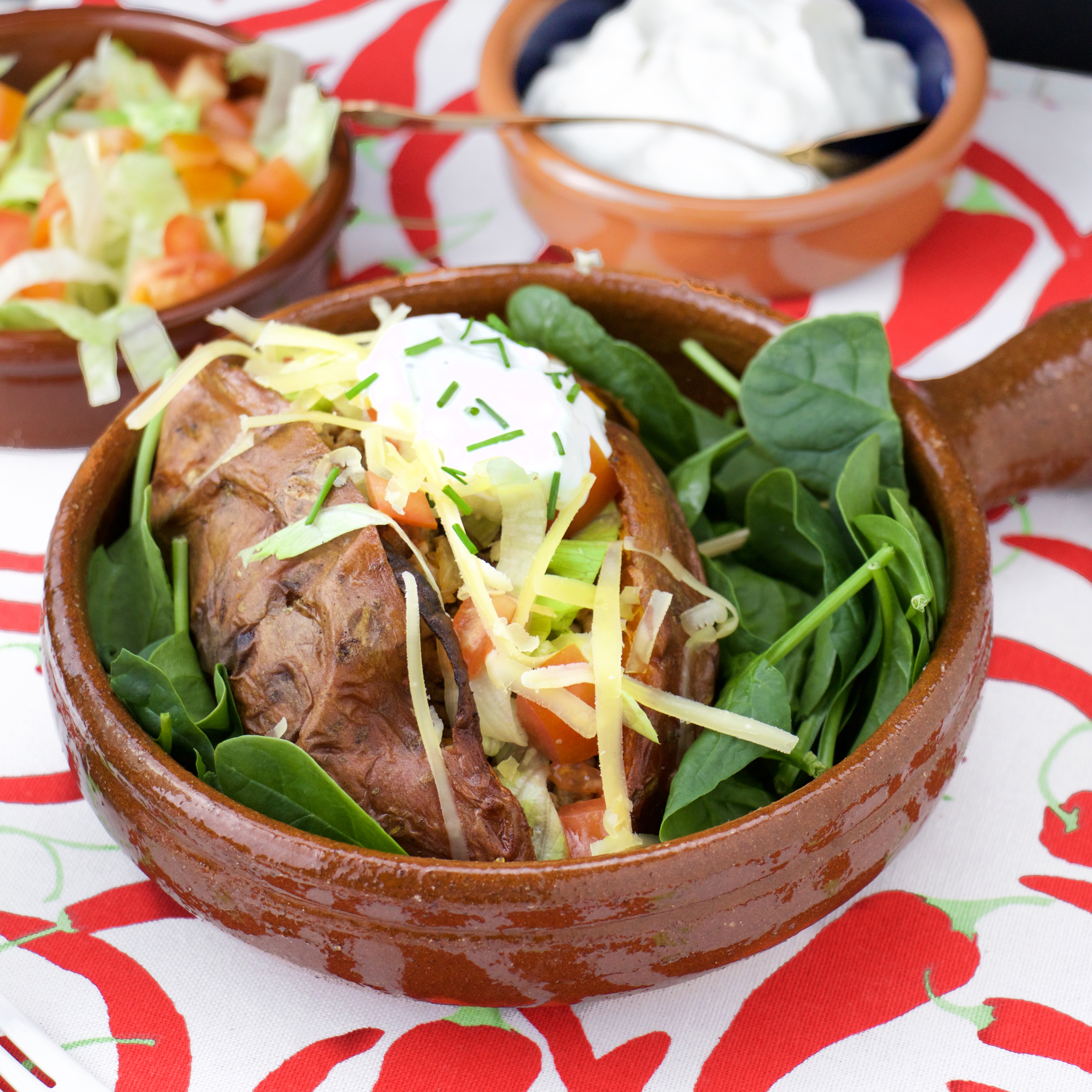 Some of you know how I love to mix up ideas… and after a long winter it’s time to call mother nature for some sun. No better way to bring the heat back than a nice spicy taco right? Well, what if we merge it to a nicely crunchy twice baked sweet potato? The spicy taco mix goes to perfection with the sweetness of the potato, plus you get some nice fresh and crunchy toppings and sour cream to makes it taste fully like a Taco. 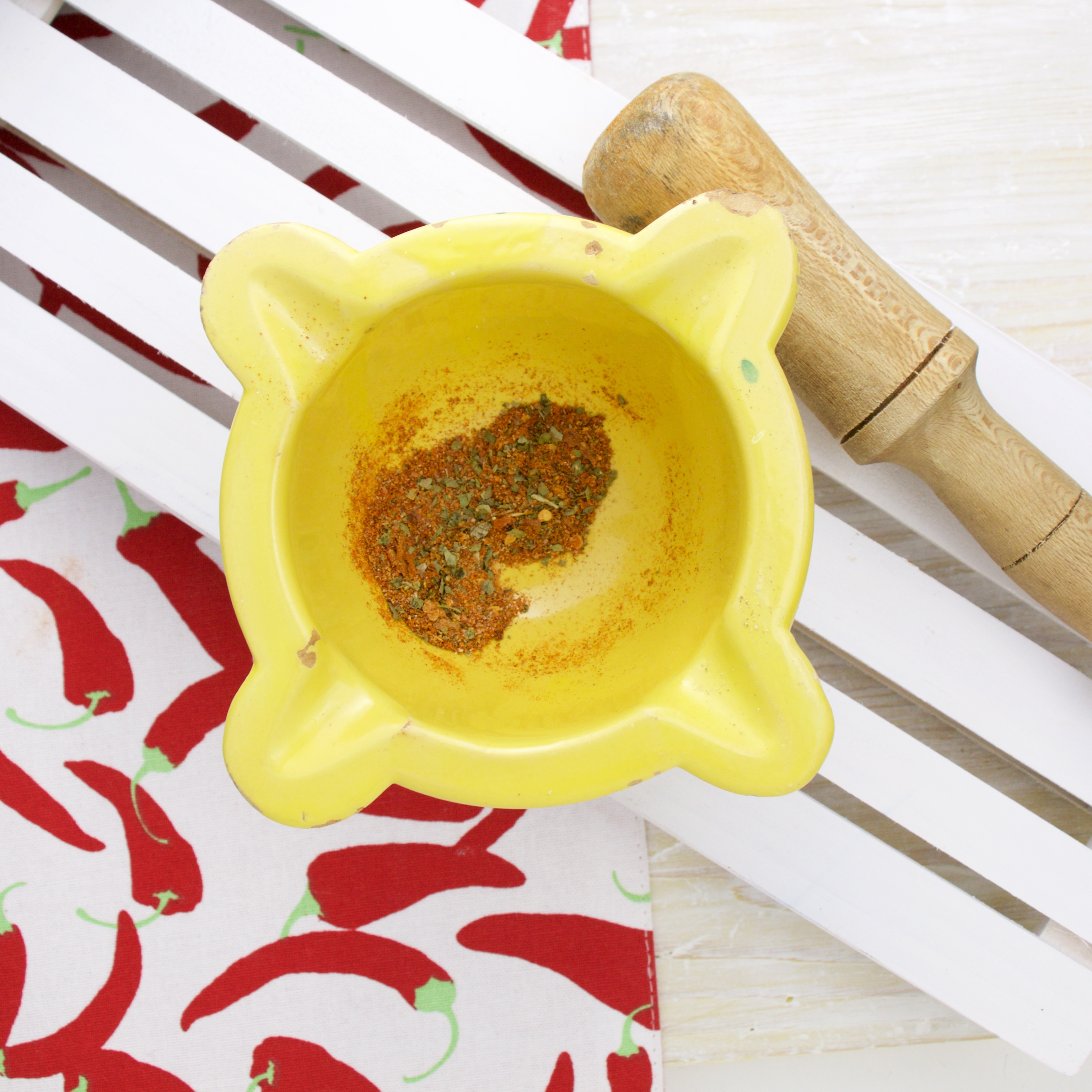 No need to go buy a “mexican spice mix” at the store, this nice taco seasoning is often already in your pantry! A simple mix of cumin powder, coriander powder, cayenne pepper, spicy paprika, oregano or dry cilantro, pepper and salt and there you have the perfect taco mix. Often homemade tex-mex or mexican seasonning contain onions powder and garlic powder, well for this recipe I’ve used fresh onion and garlic which gives a fresh touch to the meat. To finish the meat seasoning, I added a bit of “salsa de Chili Chipotle” which is easy to find at any supermarkets and a touch of cornstarch which help to protect the meat from getting tough and chewy and picks up the leftover juice from the Chipotle sauce. I’ve added the spices in the end of the cooking process because some spices (like paprika) can burn and give a bad taste if over cooked. I suggest to add the spice mix one or two minutes before the meat is done. 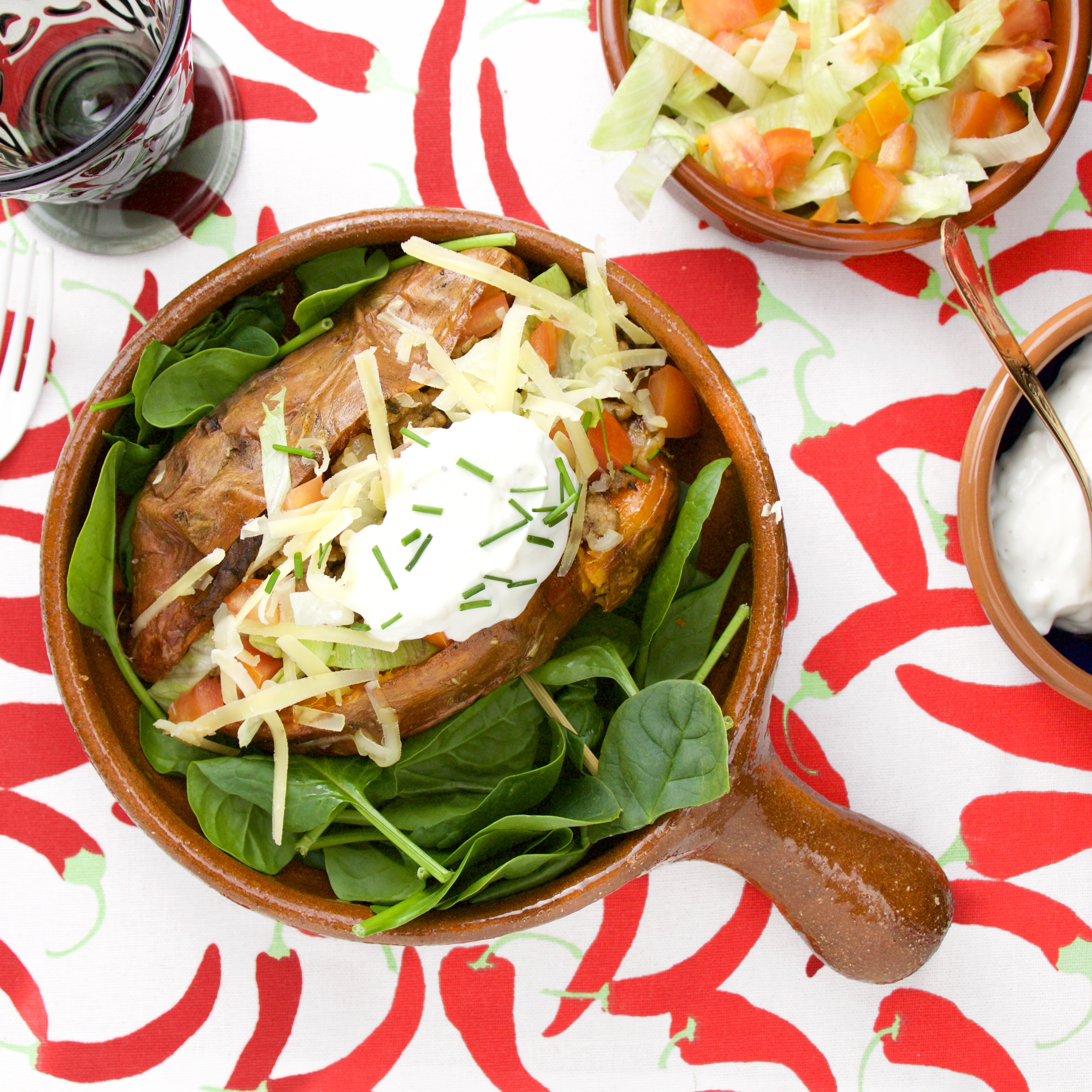 A fluffy inside with a crunchy skin is what a perfect potato should be! The best way for your potato to get those two winning attributes is to start by cooking it whole in some aluminium paper and let it cook about an hour (depending on the size, check it out with a stab to the heart;) and then once cooked… you scoop some of the potato flesh out and mash it with some butter or keep it for a potato salad or a tortilla. To make the skin extra crisp you’ll need a touch of oil over the skin and a sprinkle of salt then simply broil the potato skin side up until it gets nice and crunchy. Usually you would fill it back with some of the mashed potato but in this case I’ve kept the space for the mexican flavored meat and the fillings.

So let’s get the heat going! 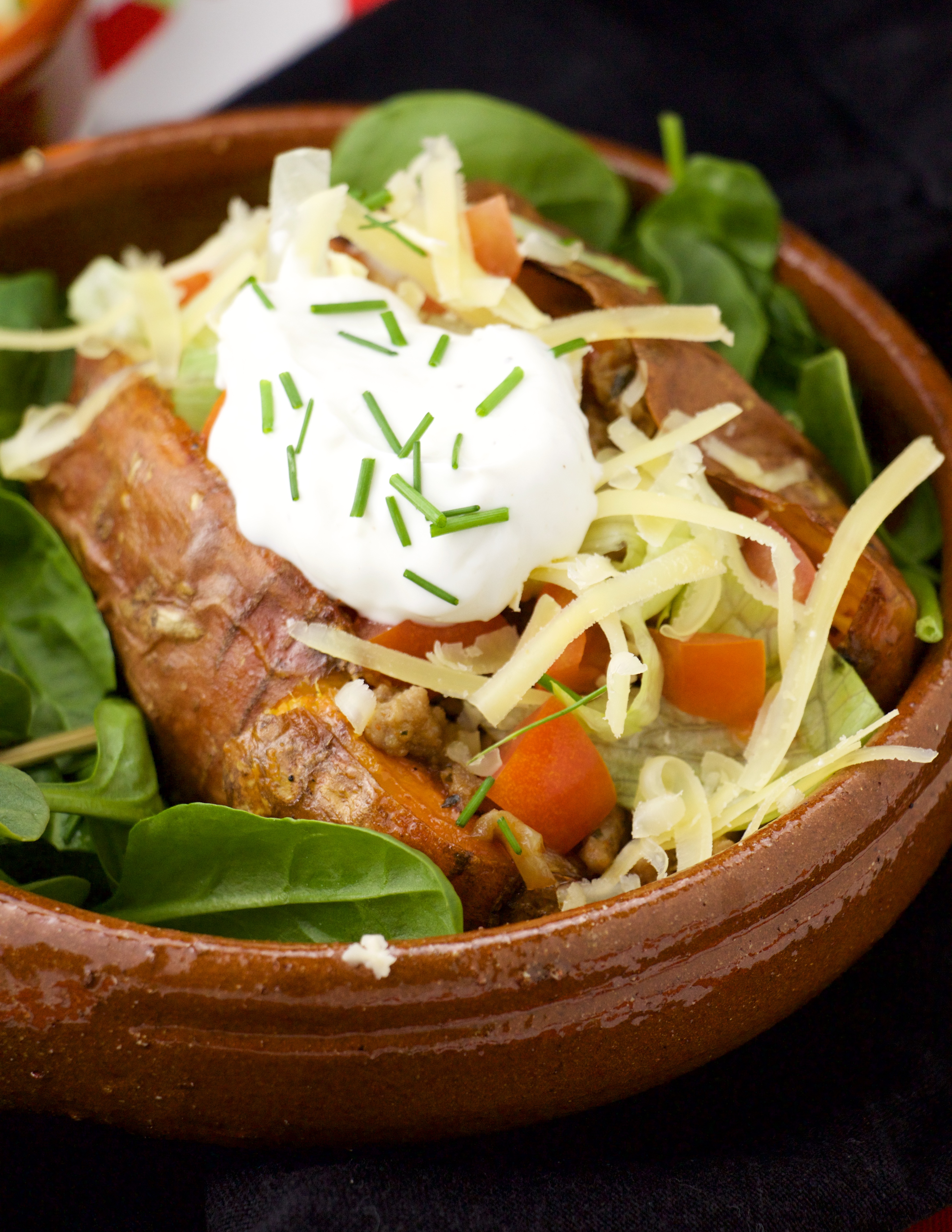 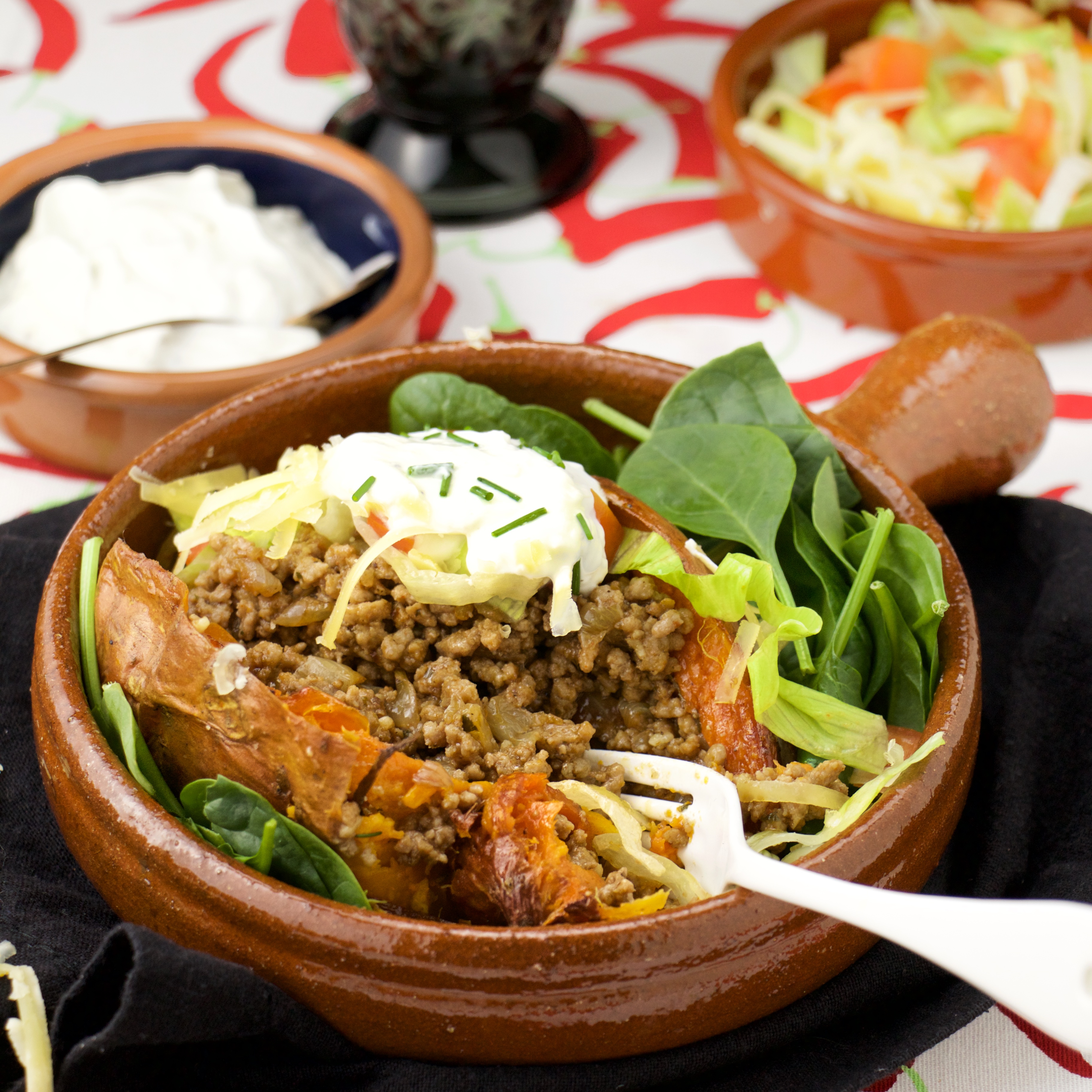