Tropical Smoothie Bowl is fest of tropical fruits; passion fruit, mango and pineapple blended with coconut milk and ice cubes for an exotic start of the day. 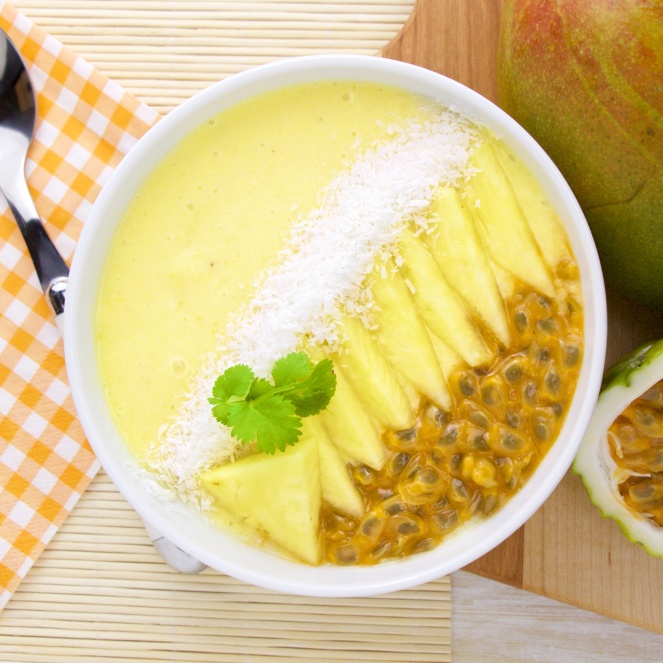 I don’t know for you but tropical fruits are my favorites! This smoothie is an ode to the tropics with its exotic flavors. The smoothie base is a pineapple and mango blended with coconut milk with a topping of pineapple, shredded coconut and last but not the least; Passion fruit (or Maracuyá).

Every bite as a new fun texture to it with an overall tropical flair! Without saying it’s filled with vitamins, let’s say… enough to last a year without getting scurvy. A great combination of exotic flavors, complementing one another beautifully.

The many names of Passion fruit 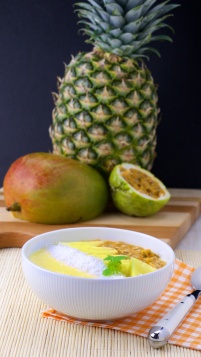 To make it clearer… There are three popular types of Passion Fruits, a yellow, a purple and reddish one. Which is without contest the clearer names we’ll get about those exotic fruits. Called after the majestic flower of a subtropical/tropical vine plant called Passiflora edulis. In english the confusion about the name isn’t such a big deal, since the fruits are coming from a faraway exotic place we simply give it the name “passion fruit” or “passionfruit” followed by its color. However in the rest of the world, where they now grow “passion fruits”, (Hawaii, South Africa, Australia, SE Asia) there are tons of different names to refer to the actual same fruit making it all too confusing.

Oh my…. this segment just here, is the longest research I’ve ever done on any posts from this blog. Also a taboo subject at home, an eternal fight over “how to name” the different types of passion fruits. My husband believe the fruits are all called “passion fruits”, whether it’s a purple, yellow one, red, banana shaped one… But after living in Peru, where they call the yellow passion fruit “Maracuyá” and then a bit later in the Caribbeans also “Maracudja“…  At home, in Spain, at the Supermarket they label those three differently: “Maracuyá” for the yellow one, “passion fruit” for the purple and the orange one “granadilla”, just as I though… Although husby wasn’t wrong… After all those hours of discussions and research I came to the conclusion : nobody knows! There isn’t a most confusing fruit name in the world! Depending on the country, it’s pretty much called something different… They all come from the same plant, but some taste totally different than others, making it difficult to call it all the same, in my humble opinion…

The purple passion fruit’s origin is Brazil, where the Portuguese would called it “Maracujá” after a guaraní term “mburucuja” which means “flies hammock”, no need for explication here… From there, it spread throughout South America, most Spanish countries down there would call the yellow passion fruit “Maracuyá”. However, back in the days, the Spanish missionaries, trying to convert the South American natives, would call the fruit “passion fruit” because its flower reminded them of the “Passion of the Christ” with symbols like the 5 wounds, the hammer and nails on a bottom part the crown of thorns… so nothing to do with a passionate love story. In the end, it seems like nobody ever bothered to figure out the actual name of those delicious exotic fruits.

Here are the other names given:

Let’s forget about the names and simply use their latin names and colors to explore the three main types of passion fruits.

Anyhow, the truth is: it’s a fantastic fruit that need much more attention! For this recipe use whether the yellow or purple variety, but count double if you chose the purple ones since they are smaller. Unlike any other fruits… these are sweet and at their best when the shell become wrinkly, if it looks like your grandma’s skin than it’s ripe and ready to be consumed. Otherwise, if too acidic simply add a touch of simple syrup to it or honey to balance some of the acidity.

Let’s get this exotic smoothie going!