An unctuous and spicy Mexican stew made with a Mole style sauce and tender beef cubes served with tortilla chips, corn and parsley, for an “Olé” night. 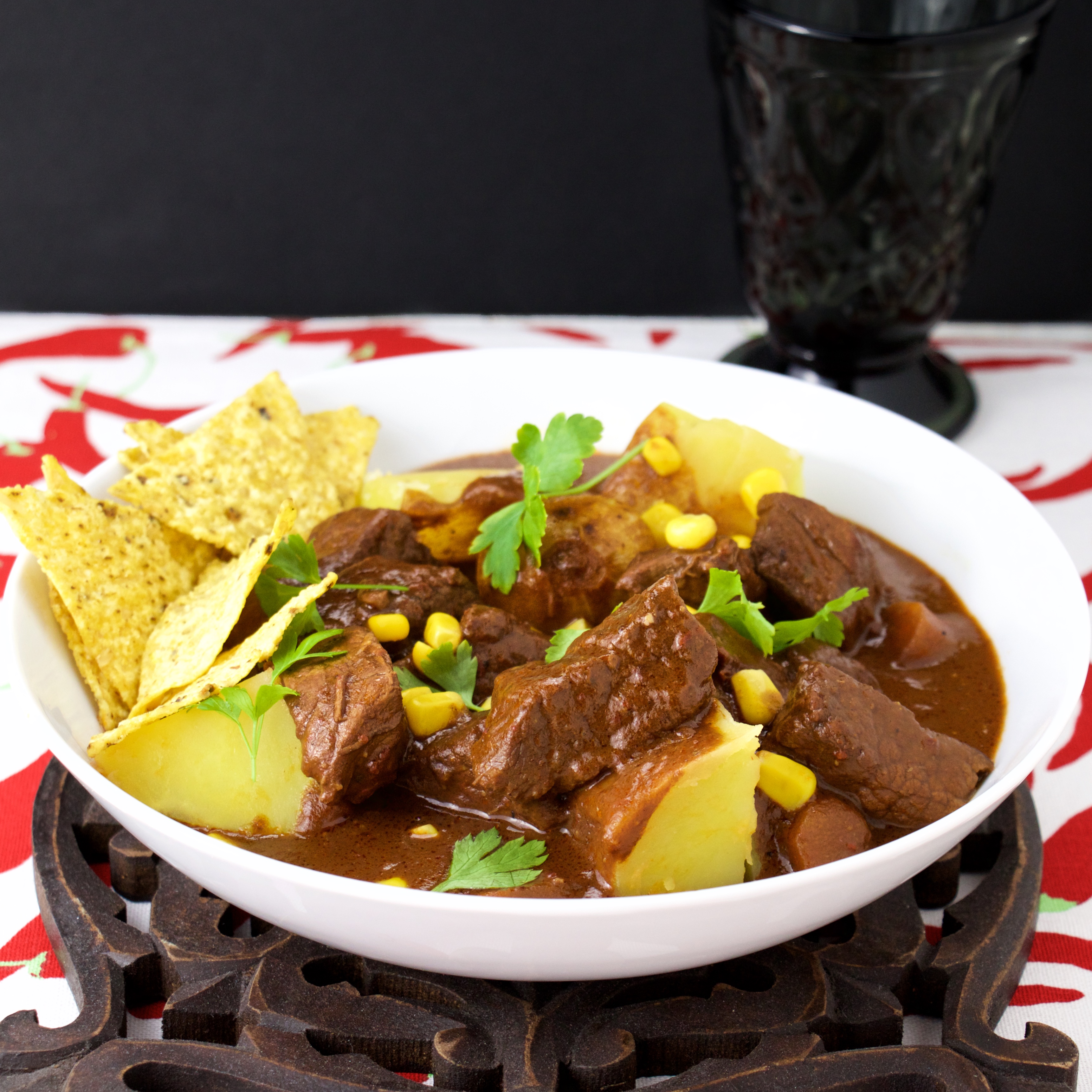 I was browsing the Web last week and saw lots of stews and Mexican food around… it made me want them both badly… so I’ve decided to merge them both into one nice stew meal; a Mexican Stew. The two are comforting and great dishes for winter times but this stew version is double the comfort; it’s a “French” way stew with the usual; carrot, potato, beef, mini french oignons merged to a spicy Mole style sauce for a Mexican flair; adding Chipotle peppers in Adobo, tomato puree, chocolate, corn and some cinnamon, cumin and coriander powder. Result: Fantastic!

The mole sauce is a thick spicy Mexican sauce made with chocolate and lots of hot peppers. Since my maximal tolerance toward “spicy” is at medium-hot,  I’ve aimed at medium-hot for this dish but feel free to add some chipotle peppers  if you like it “hot”. Those chipotle peppers are considered mild from the start with only 3000 SHU / 10000 SHU on the Scoville scale, so… this is a meal suitable for everyone. Plus, they come in an adobo marinade which is a tomato, garlic and spices paste, fitting perfectly with the stew. Another particularity of the Chipotle peppers is its smokey side, since they smoked them before being marinated.

This isn’t a joke, unsweetened chocolate is just the best friend of any stew. First, because it’s a thickener, all natural, no need for that extra flour in the beginning or corn starch to thickens the sauce. Second, it gives the sauce this deep rich brown color which makes it just irresistible. Third, dark chocolate is filled with health benefits; lower the bad cholesterol, may be lowering blood pressure, great source of antioxidants, protect the skin from the sun, cut hunger, contains lots of fibres, iron, magnesium, etc. Let just say it’s great news for our health. This Mexican stew doesn’t contain more than 50g of dark chocolate, although it looks like it contains lots because of it’s thick consistency. It’s actually half a small bar of dark chocolate, no more and no worries the flavor is really subtle. 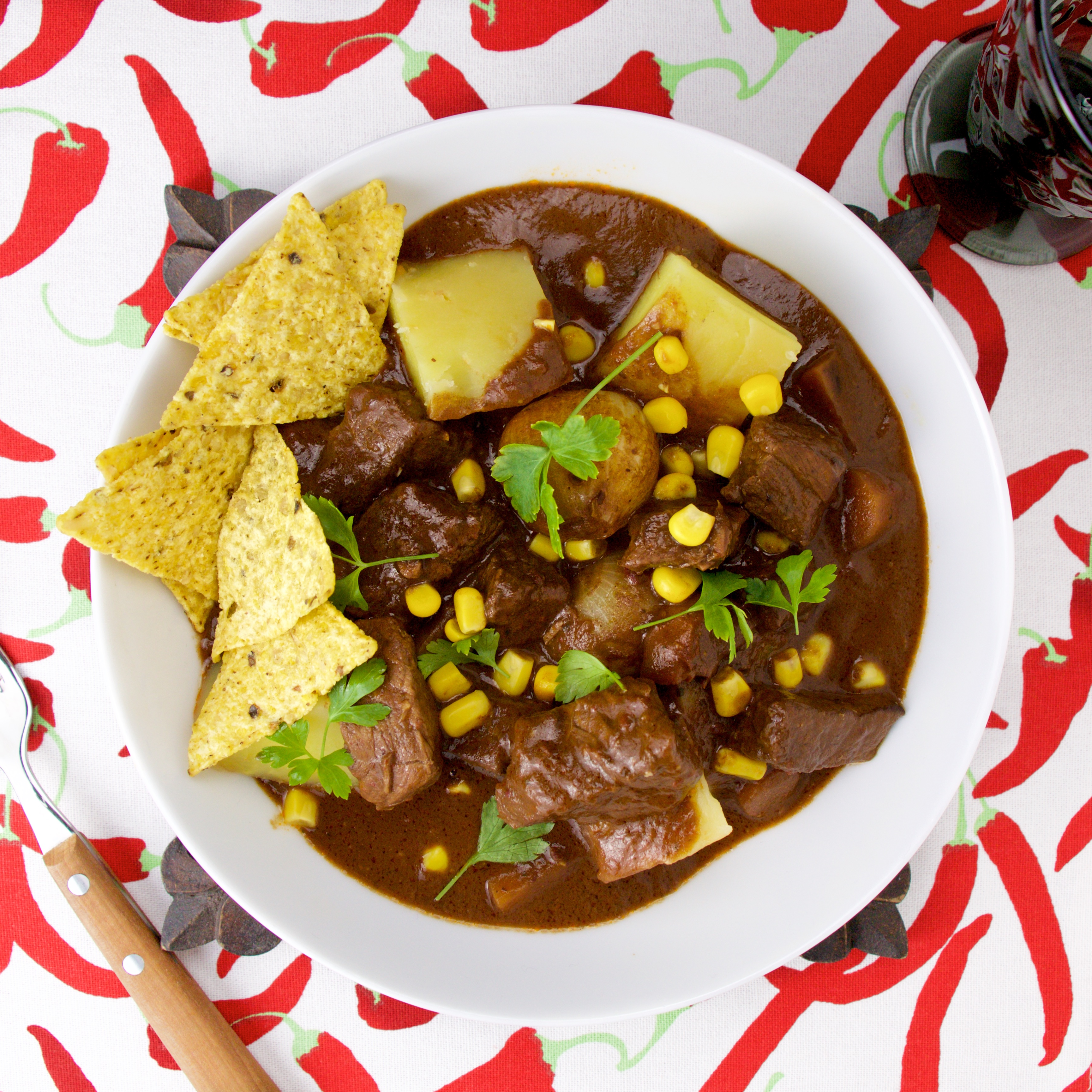 The toppings are totally up to you, I wanted to make it extra Mexican looking so I’ve added some corn grains, tortilla chips, parsley. Those are all optional of course. Also, I’ve done the potatoes on the side but some people might prefer being serve this dish with rice, which is usually the side dish to mole dishes in Mexico. So it’s all up to you! 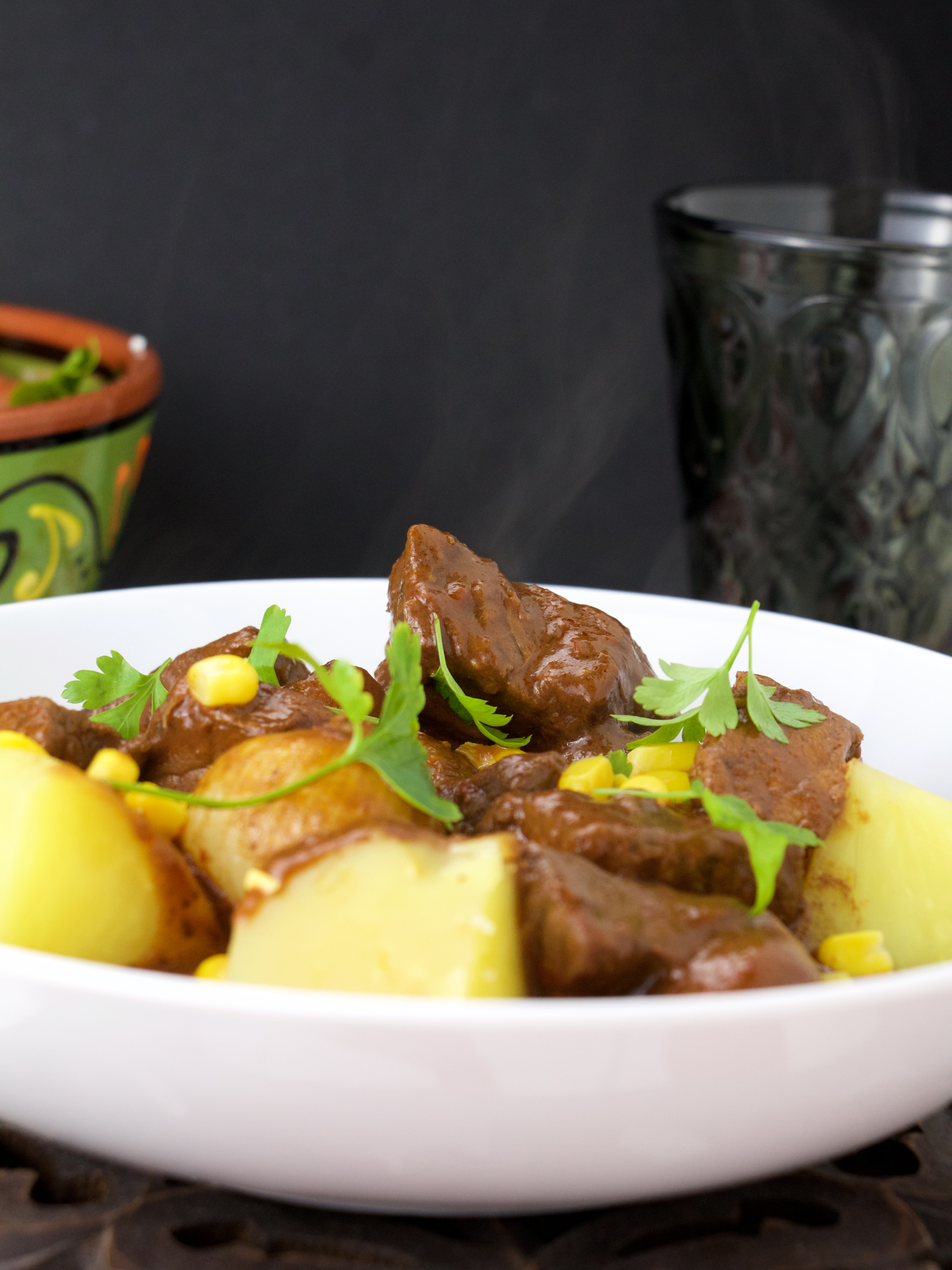