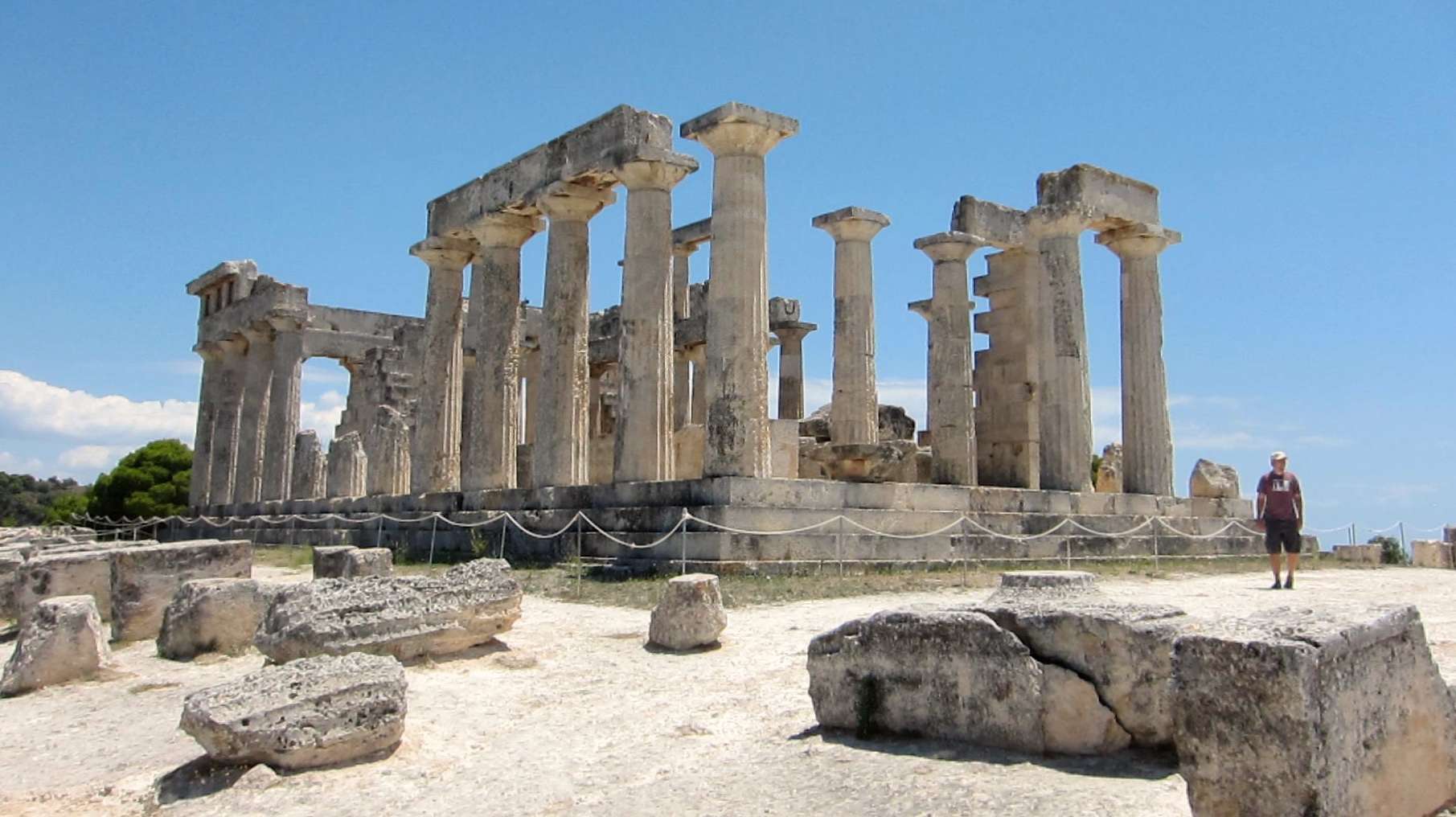 Greece the land of Temples, the birth of democracy and mythology but also land of exquisite cuisine. I’ve spend a week in Aegina this summer, a small island, about 1 hour south of Athens by boat. This Island is a special one, first it’s home to the Temple of Aphaia, one of the best preserved doric temples in Greece. Plus since 1860, the island is a top producers of quality pistachios in Europe. Their pistachios are simply divine, they say sweeter than most pistachios, those trees are growing easily all over the island, although not so easily elsewhere in Greece or even Europe…

As soon as you touch land, in the harbour, you’ll see many stands of pistachios here and there. A pure pistachio heaven! They sell all kinds of products like; pistachio butter, pesto, paste, nougat, preserved in honey, candies, baklavas, etc. Plus those “nuts” (technically not nuts but seeds) are lower in fat, calories and higher in fibres than most, making it a great healthy snack!

For this travel/food post I simply wanted to share some of the delicious Greek specialities I’ve got to try while on my too short trip to Aegina. Some are well known worldwide, others less but always with interesting stories attached to each of them. Hopefully I can pick the curiosity, and give you the taste to Greek cuisine tonight, or even book a flight to Greece. A lovely place! It’s bold and aromatic cuisine that uses great products from their land and where tradition prevails. 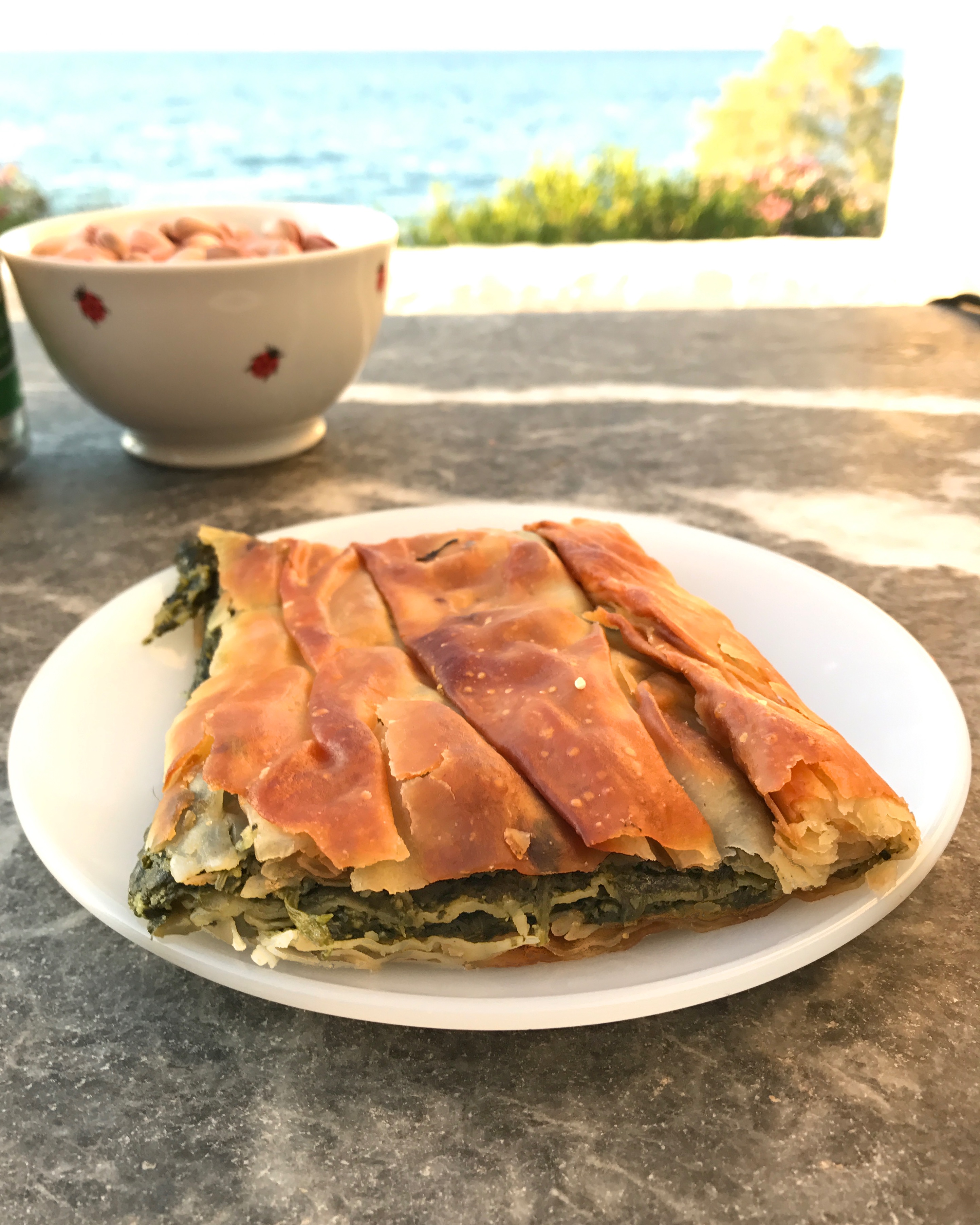 This popular globally, spinach pie is simply delicious! A nice crunch to it filled with soft and creamy spinach. This phyllo savory pie is usually mixed with some ricotta or feta cheese, onion and spices. You’ll find it in any bakery around Greece, sometimes made with flaky dough instead of phyllo. It also come in different sizes and shapes. A great vegetarian snack!

This is the cousin from the above Spanakopita, quite similar in its form although the filling here is cheese. Usually a mix of feta, yogurt, butter and egg, and is usually eaten mid-morning since the Greek solely drink coffee for breakfast. It also could be made with whether many layers of phyllo sheets or flaky pastry (above picture is flaky pastry). A simple yet fulfilling breakfast or snack with a lovely flaky shell, yet creamy savory interior that is irresistible! 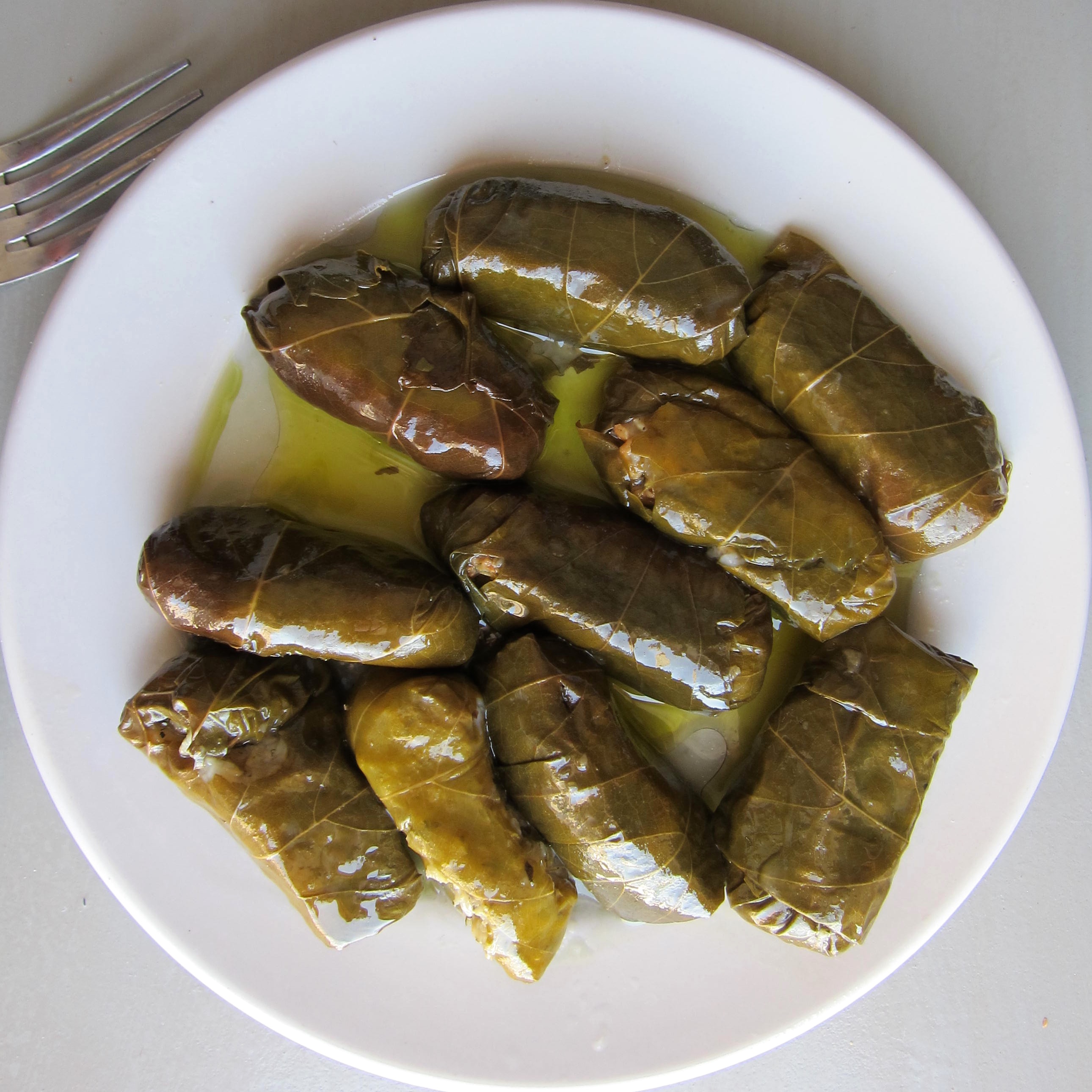 These little bites or snacks are made of round grain rice, herbs enveloped in vine leaves and drizzled with olive oil. These can be eaten warm or cold, fresh or preserved in a can, vegetarian or meaty. The warm ones (with or without meat) are made from the fresh vine leaves and are seasonal, meaning you’ll find them solely in the beginning of summer throughout summer. They are preferred by far to the cold preserved kinds. However I didn’t get to try the fresh kind, just the “canned” ones and they were “in my book” delicious! I’m guessing I would probably lose my mind over the warm ones! Vine leaves have this certain perfume to it, which I personally dig, making this a “one of a kind” bite! 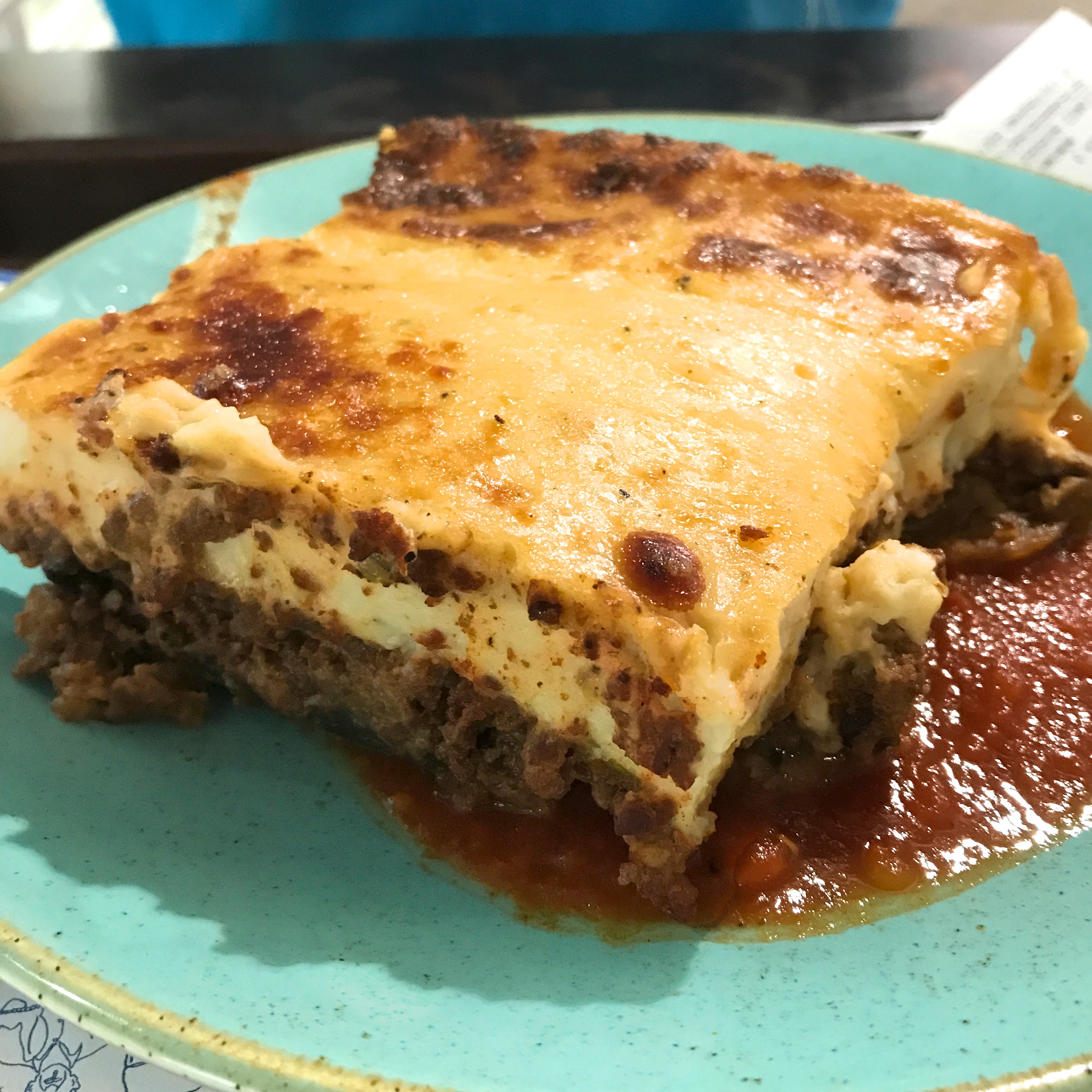 Often mistaken for a simple lasagna with eggplants instead of pasta, this is the dish every Greek grandma knows best. It’s a layer of nicely spiced meat, tomato sauce and eggplant true, although the topping is a velvety mashed potatoes top layer with cheese, gratin style! A pure delight, especially in the colder months, it’s the comfort food by excellence for Greek people. 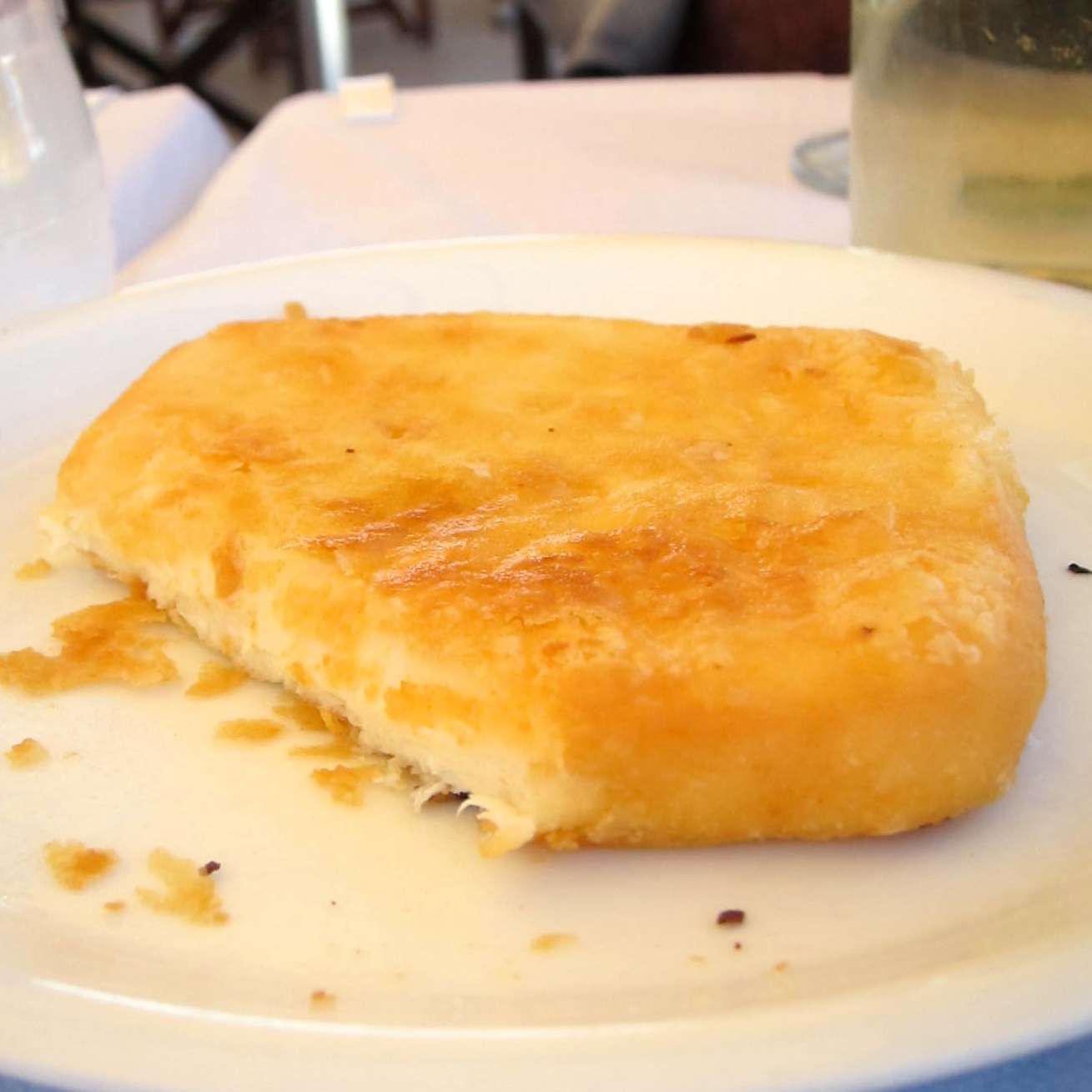 This is a delight for any cheese lovers out there! A fried cheese made of hard yellow sheep (sometimes goat) cheeses called graviera, kefalograviera or kefalotyri depending where you are in Greece. All similar to halloumi cheese, a nice to grill cheese that won’t melt in the pan. It’s a popular meze (Greek Tapas) and often served with a squeeze of lemon. A fun squeaky texture, a great treat if you are not counting the calories. 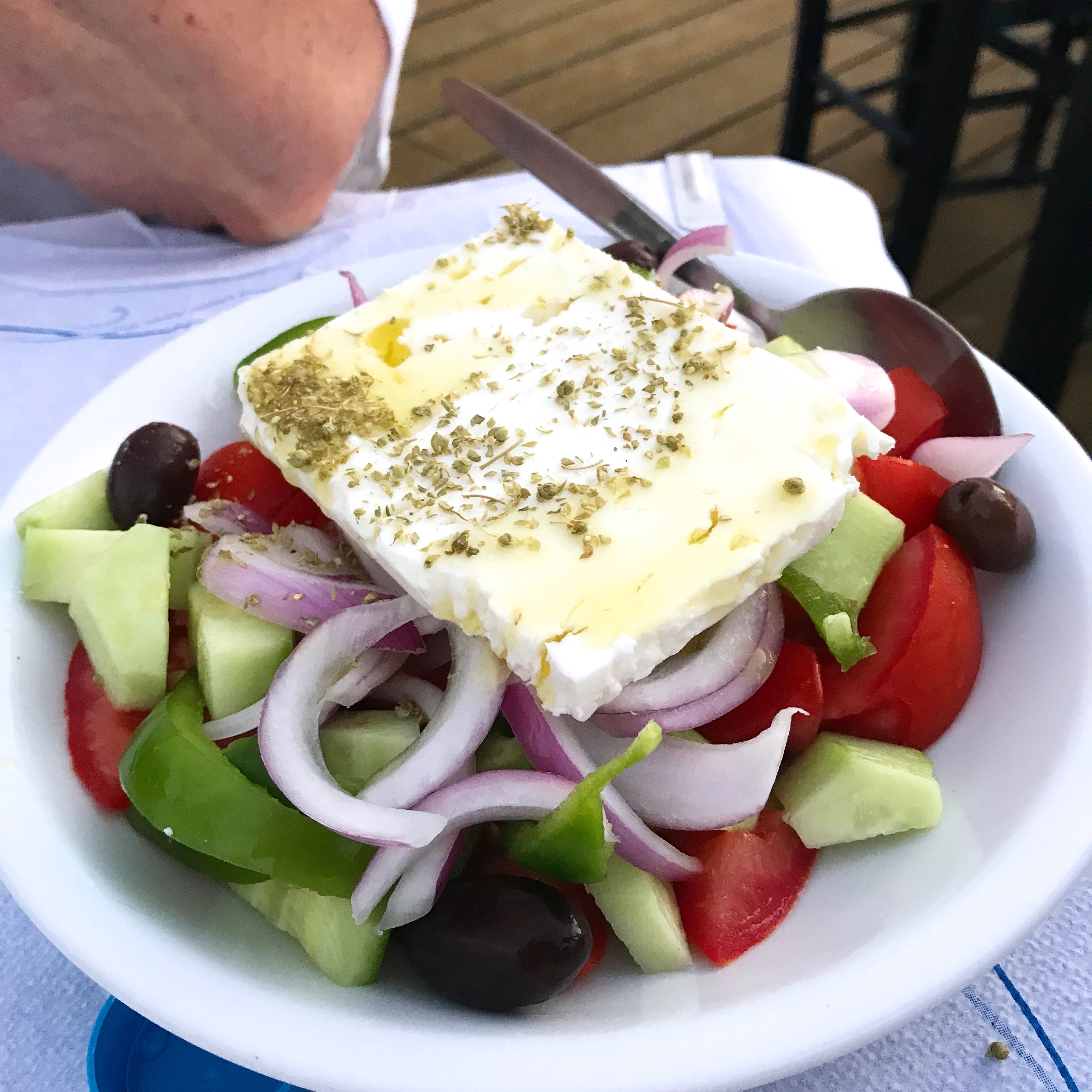 This one is a no brainer, everyone knows Greek salad… Although not everyone know that the authentic Greek salad comes with no lettuce and usually with a few extra green bell peppers. Without saying, Greek’s love their feta cheese, they serve their salad with a big brick of it with a few oregano dry buds on top. Those dry oregano buds are an explosion of flavor! To finish it up a nice fruity Greek olive oil. Impossible to get through Greece without trying one of those! Simply divine!

As I’ve said earlier, Greek people don’t really eat breakfast, or they do although mid-morning after their coffee ritual, which is the first thing they do in the morning. There are two main types of coffee; one being the “Greek Coffee” a thicker espresso most of the time served with sugar (they ask for no sugar, little or full sugar) and the other is what you order to cool down in the afternoon; the ice cold Frappe. The authentic “Greek coffee”  is traditionally done over a hot sand base in a small bronze pot called briki, similar to Turk coffee, but don’t you dare say this out loud in Greece… or also done in a simpler briki over direct flame with a super fine coffee powder simply stirred with a touch of sugar and water. No filters needed in the Greek way of making coffee so there will be a deposit at the bottom of the cup, so never stir this coffee unless you like mouthfuls of sandy texture liquid.. The sugar being added during the cooking process there is no need to stir. Even for the dark coffee drinkers will need a touch of sugar in this one, since it’s extremely bitter otherwise. Similar to eating a big piece of 90% chocolate in one shot. The more foam on top the better, it’s supposed to bring prosperity and some say you can even read the future from this type of coffee… but don’t ask me how it’s done… that’s for other types of bloggers.

The Frappe is made with Nescafe instant mix, whipped into a thick foamy iced coffee, this is what everyone needs under the Greek sun. So refreshing! It can be again ordered without, a little or full sugar, the more sugar you’ll ask for… the better the foam will be. Made in a “mixer” machine, this drink is essentially in every coffee shops in Greece and perfect to cool off after a day in the sun. Served to go or on the spot! 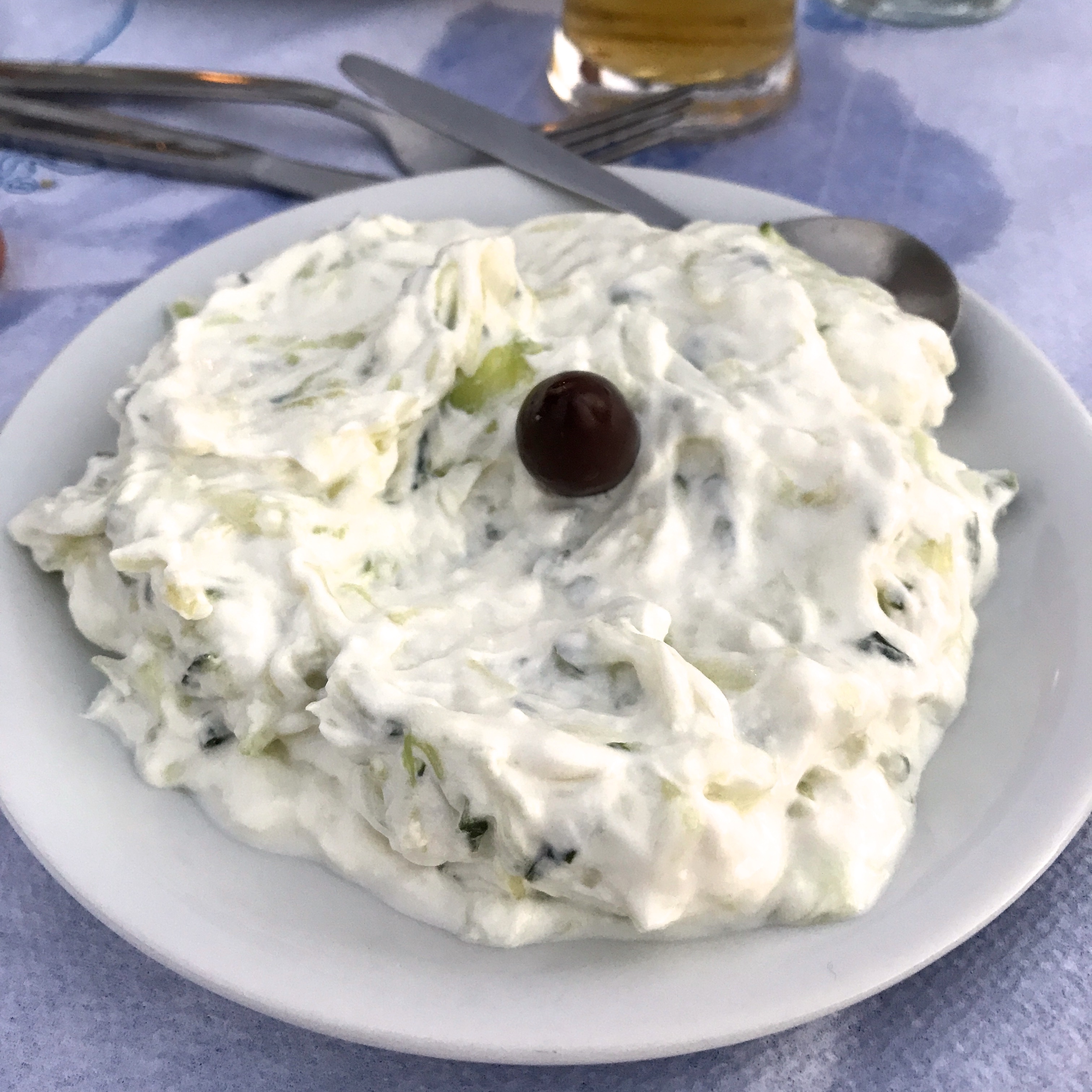 Who doesn’t know Tzatziki? Probably the first thing that comes to mind for many when thinking about Greece… A smooth, creamy and powerful dip! It can be served with any grilled meat like gyros or as a meze (tapa) with a warm pita bread. Traditionally made with sheep or goat milk, today the Greek yogurt is often strained cow milk like the ones we can find in many markets around the world (Total). However, in Greece, you’ll find many types of yogurt going from sheep yogurt with a crust on top to a more sour goat yogurt to the commercial strained cow milk yogurt we all know. So traditionally, the Tzatziki would have probably be made of this sheep or goat yogurt although nowadays it’s mainly done with strained cow milk. In other words, nobody really know for sure what exactly is “Greek yogurt” since there is many varieties of it. It goes as well for the tzatziki, being made with all the above and resulting in a different tastes. Most tzatziki recipes out there incorporate some mint or dill in the dip although this is not what most Greeks would do. They prefer a “herb free” plain yogurt with garlic, cucumber, a touch of olive oil and vinegar.

Paximadia and the many more Greek breads 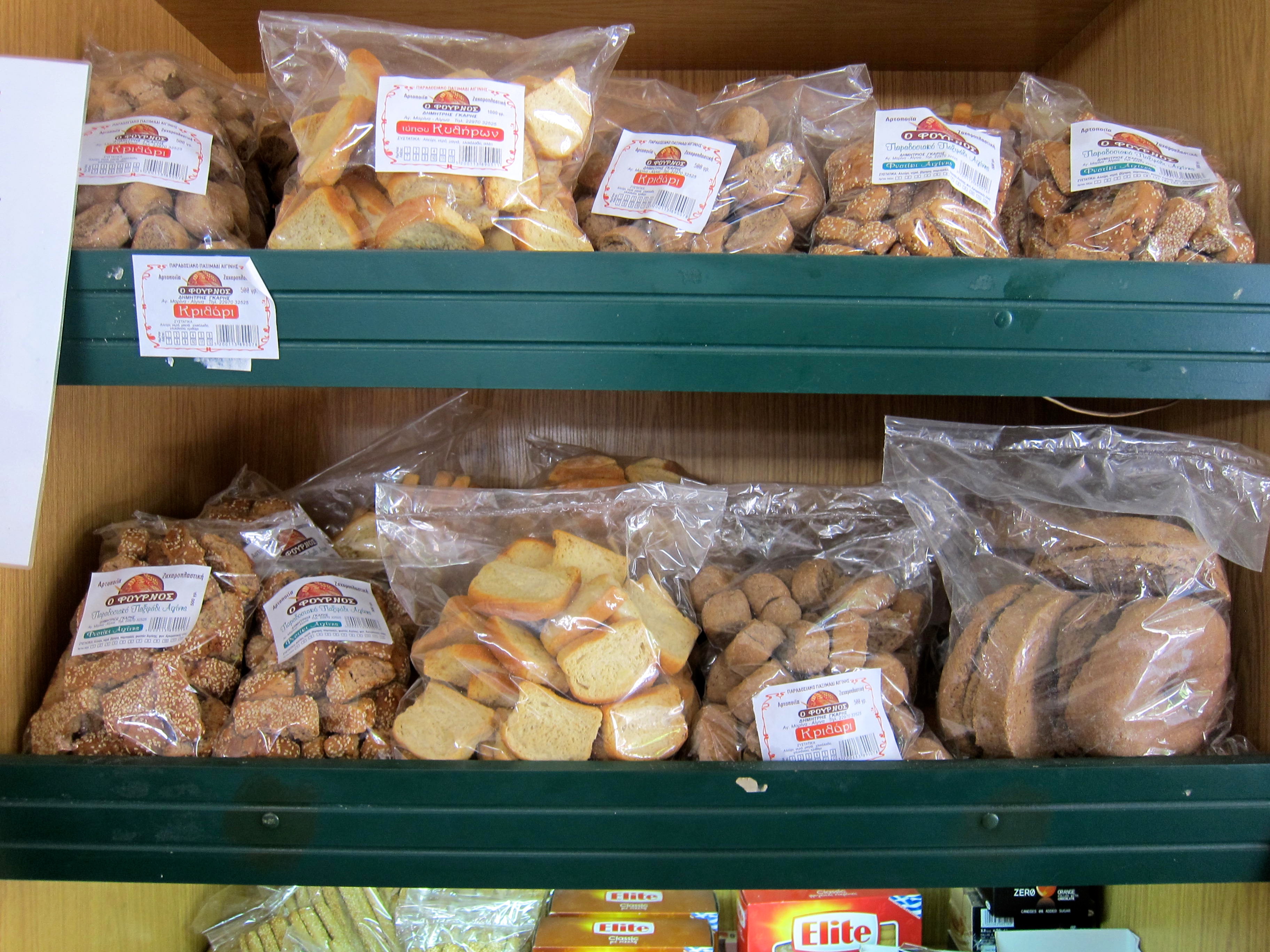 Paximadia are twice baked breads made of barley rusk, invented by shepherd from Crete island a long long time ago. A great way to preserve the bread longer, yet keep all its nutrients. They woulds simply bake it twice and make it slowly until completely dry. I would personally call this bread a “tooth breaker” since they are really hard, but the trick with this particular bread is to soak them up in any liquid to soften them up before consumption (by any I mean, soup, water, oil, even wine). They’ve regained popularity in those last few years, now bakers make many variation of them some darker (just barley), some with sesame seeds, etc.

I’ve encountered many types of breads, some of which I couldn’t find their names, but one thing for sure, Greeks have a whole lots of different breads. Some breads are made with durum, corn, barleys or emmer flour and a mix of olive oil, milk, honey even cheese can be found in them. If you want to know more here is a lovely Greek Blogger with all the info (The Shepherd and the Olive Tree).

Seafood of all kinds

Of course, coming to Greece one will have to try some seafood! Greece having a lot of coastline, their diet is filled with seafood. Popular dishes are the grilled sardines, mini fried fishes, kalamarakia (squids) and also a another grandma favorite to make the psarosoupa (fish soup) all excellent! But the one thing I believe represent Greece seafood the most is the grilled octopus. It’s got a nicely crips exterior with tender flesh that is slightly smoky, a great meze to order. 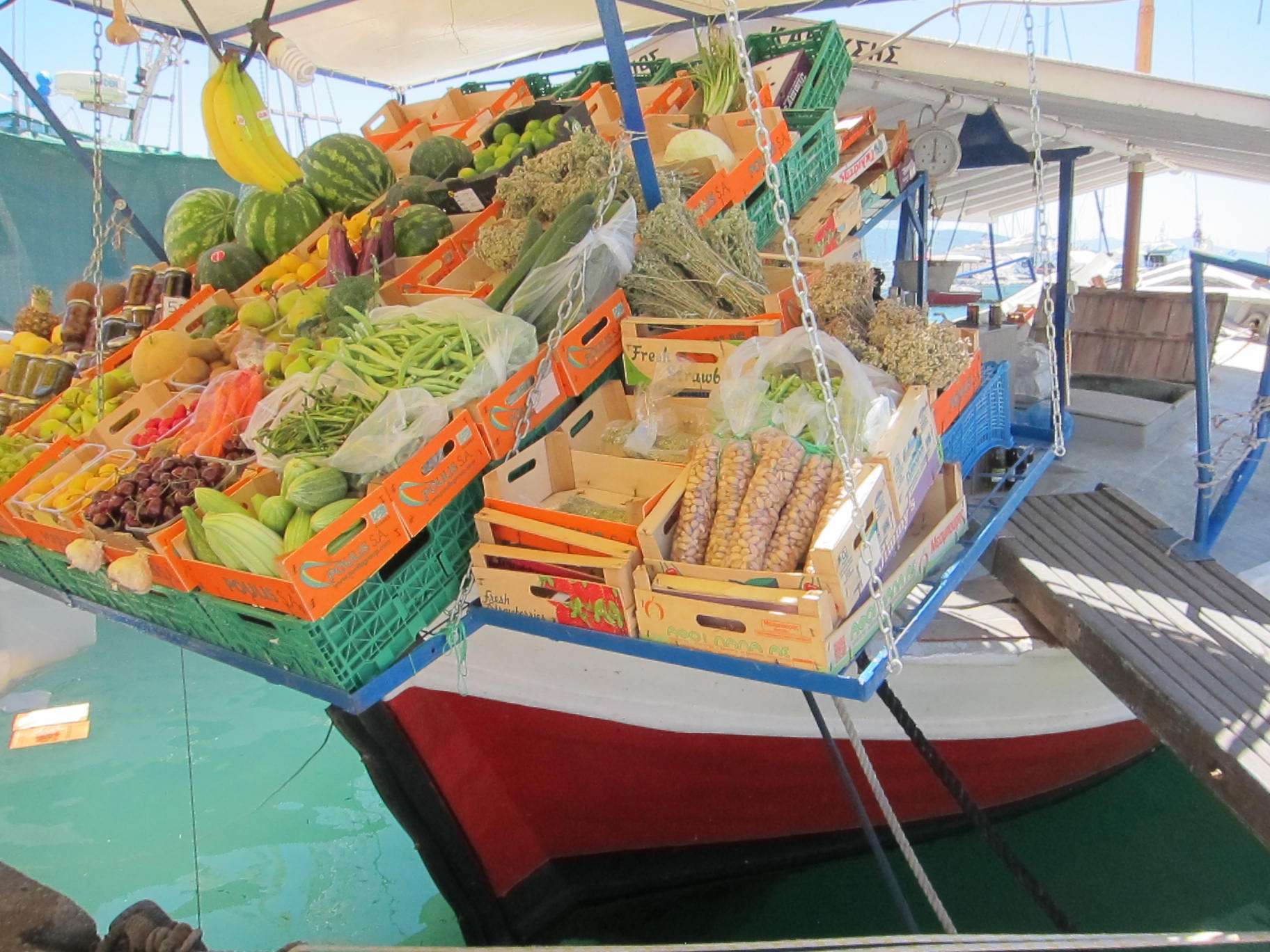 On Aegina island, they sell their veggies showcased in front of fishing boats, which is quite the show! They sell those long branches of dried oregano with buds and all the usual veggies. I believe Greece is great for vegetarian travellers, there are many vegetarian meze (tapa); like the roasted eggplant, fava (yellow pea puree), zucchini fritters, giant beans called plaki, stuffed tomatoes, etc. 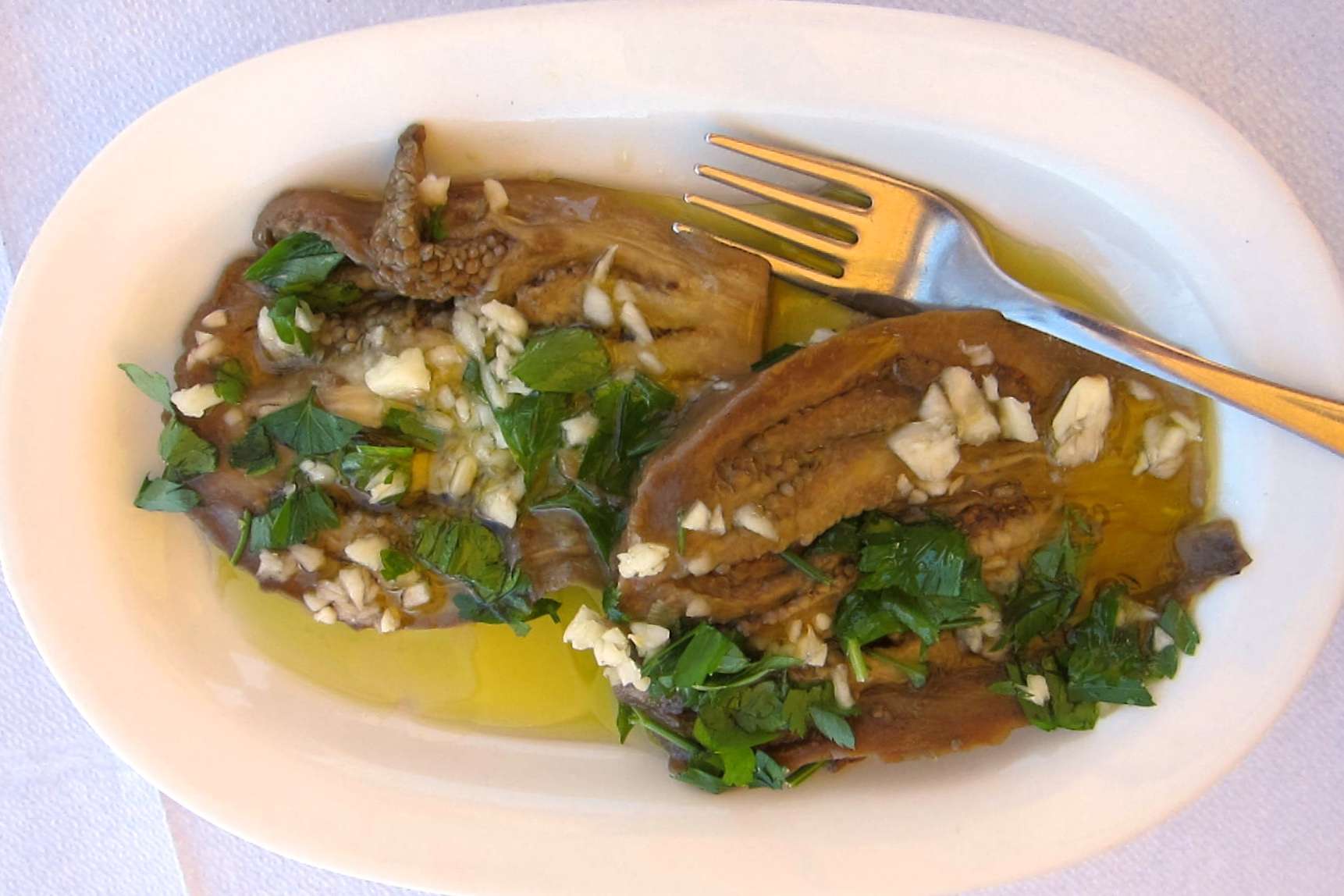 Oh! and I almost forgot to mention: Ouzo and Retsina wine is a must try.

Ouzo is an anise aperitif better served with ice cubes and a touch of water, restaurants in Greece serve it in small bottles. Ouzo is the drink of choice to mix up with a few Mezedes (Small plates).

Retsina is the common wine preserved in pots sealed with Aleppo pine resin, which gives it its particular woody taste. This way to preserve the wine, before actual barrels arrived, is from around 2000 years old. A technique and tradition they kept alive in Greece all those years.

There are so many more Greek specialities I couldn’t get my hands on like the Gyros, souvlaki, sheep/goat yogurt, Pastitsio (Greek lasagna), etc. I had to keep some for the next time I’ll go visit, hopefully soon!

All there is to know about Tapas