The ultimate tapa for Catalans, pa amb tomaquet, or Spaniards, pan con tomate, is the simplest and most beloved of tapas, a lightly grilled bread with tomato, extra-virgin olive oil, salt and if you wish: a little garlic flair to it.

If you’ve ever set foot in Barcelona or its region, you probably saw this Pan con Tomate or Pa amb tomaquet on every single table. Omit to order it at the restaurant… surely your waiter will ask you if you want some with your meal. It’s simply inconceivable not to order it. Pan con tomate or its Catalan term Pa amb tomàquet is such an integral part of their culture. So popular, to the point of having a book written about it, by Leopold Pomés called Teoria i práctica del pa amb tomàquet. You know it’s a serious matter when a whole book is written about a single dish.

Nèstor Luján wrote about pan con tomate back in 1884 although its origin goes way back to the 16th century. It was a way to revamp dry bread by adding the juice of tomato to it and letting it soak all that delicious tomato flavour. Today, the technique is used also in sandwiches, called Bocadillo (Spanish) or Entrepà (Catalan). Instead of adding mayonnaise or mustard they cover the inside of a baguette bread with tomato pulp and olive oil and fill it with whether, Iberic ham, cheese, egg tortilla, sausage, etc.

The rest of Spain also does pan con tomate, although it isn’t as “holy” as in Catalonia. Done sensibly differently and often with a different type of tomato. The Spanish version uses a cheese grater to pick up the pulp from the tomato. There are also other variations like the one in Majorca, where they slice tomatoes, add them to bread and top it with olive oil, vinegar, capers and olives, this one is called Pamboli amb Tomàtiga.

The tomato used are typically the ones you’ll see hanging on a string at any Catalan market called ramallet (Catalan). This type of tomato has a thicker skin, therefore it can be conserved way longer, the hanging factor also helps to preserve them. The skin loses water and thickens, resulting in a concentrated interior which tastes sweeter and bolder than most tomatoes. Plus, it has the perfect texture, once rubbing it on the bread, the pulp just breaks apart easily and evenly leaving the skin behind. It also gives the bread this uniform “tomato topping” without too much “water”, that most tomatoes are filled with. The perfect tomato for this dish!

At home, I would suggest an Italian pear-style tomato to reproduce this dish or any sweet type of tomato that doesn’t contain a crazy amount of water.

The two main bread types used in Catalonia for pan con tomate is whether a flatbread called coca or a round loaf. But really… the most important is to use a good “artisanal” type of bread, its form doesn’t ultimately matter. I, personally, prefer the flatbread, and most restaurants do too. Its crust is crunchy and interior fluffy with lots of holes to trap the pulp in. There are also two ways to toast the bread, whether you do it lightly in the toaster or oven or often used in the Masia, or rural restaurants with the round loaf type of bread, grilled lightly on the BBQ. Remember it was originally made to revamp dry bread, it should not taste like toasted bread so go easy on the toasting, the bread should stay relatively white.

This dish is usually consumed with other tapas, but also as an appetizer or side dish to a full dish. In rural restaurants, they’ll bring you the grilled bread, tomato, garlic, olive oil and salt separated at the table and let you make your own pan con tomate. Most times, they offer a garlic clove with it, which you can rub on the bread before adding the tomato.

Of course, a popular topping to this dish would be the famous Iberic ham if you are lucky enough to find some.

For this recipe, I’ve made 2 versions of pan con tomate: the “Traditional Catalan way” and the “Spanish way” 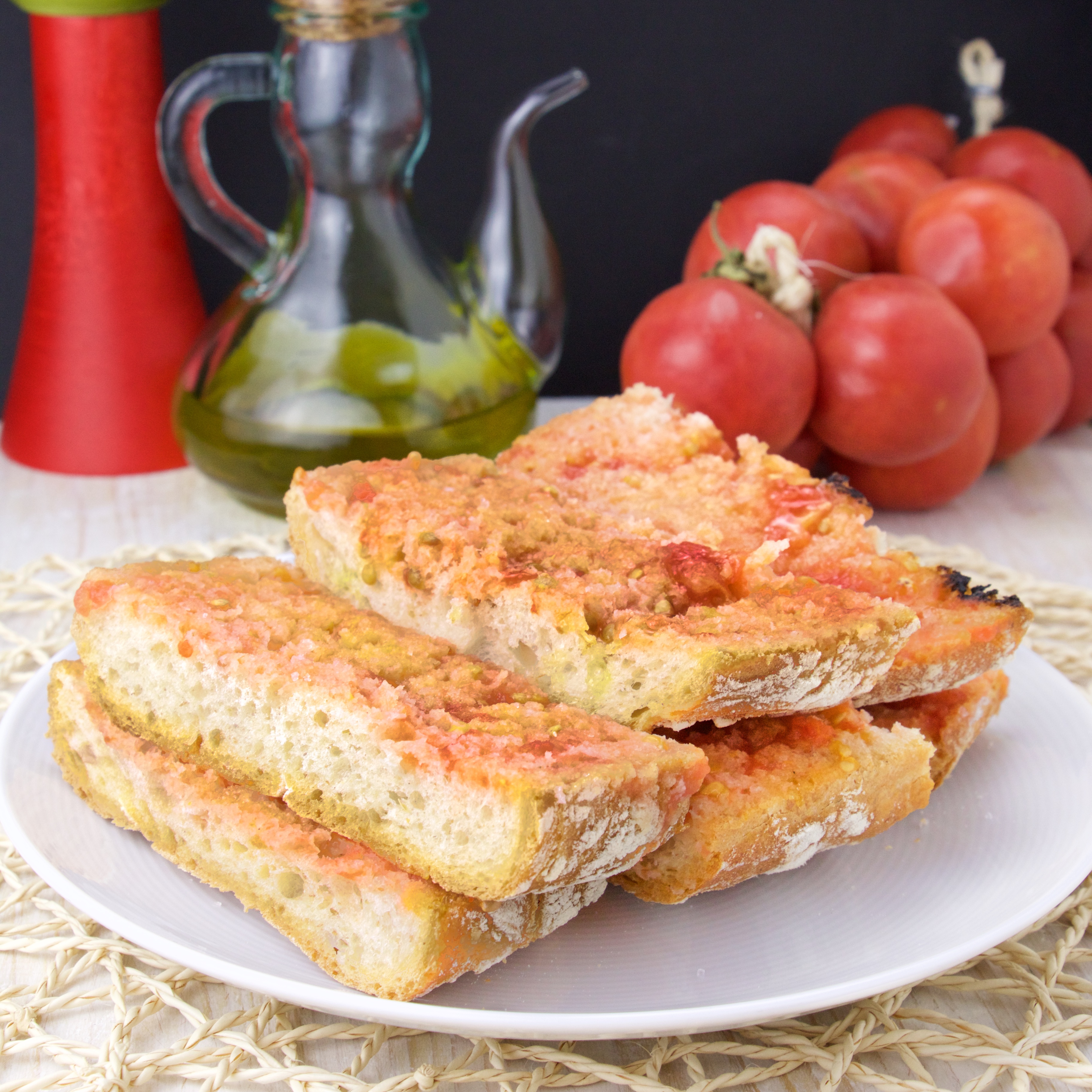 (this version has a more generous amount of tomato)

Serve with tapas or any Spanish dish!